As discussed in our previous article Counterfeit Coins: the Basics, it is far easier to learn the characteristics of a genuine coin than to learn the features of counterfeits. Collectors with a trained eye, however, can also spot counterfeits based solely on what makes these coins fake. In this article we will discuss some of the more common and obvious characteristics of counterfeits. Although the methods discussed here are somewhat crude, it should be noted that the decreased cost and  increased availability of modern technology has made the present day counterfeiter’s coins more sophisticated and difficult to detect.

Casts. Of all the methods of producing illicit coins, casting is the easiest to detect. Cast dies are formatted, sometimes convincingly, for the obverse and reverse. What makes cast copies so obvious is that the two sides must be joined after they are made. This usually results in a pronounced seam along the edge. Sometimes a counterfeiter will be savvy enough to fill this seam but it’s almost always noticeable upon magnification. When weighed against the genuine article, cast fakes are usually underweight because base metals (tin, lead, and zinc) are used in lieu of precious metals. 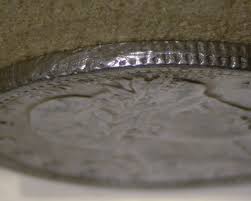 Spark-Erosion Coins. Like the cast method described above, the spark-erosion process results in easily detectable fakes. The process is carried out by putting a model coin (usually genuine) into an electrolytic solution and facing it against a steel die that will eventually become the counterfeit. An electrical current is then passed through the model. This creates a spark that etches the desired design onto the steel die. The etching, while leaving behind a decent replica of the design, also creates pitting that will be removed through polishing. While the polishing can remove pitting in the fields, most counterfeiters employing this method do not have the means (or patience) to clean up the narrower design elements. This is what makes these particular fakes easy to detect. While the fields might exhibit an almost proof-like polish, the minor devices look lumpy in comparison. The excessive polishing makes these fakes appear abnormally sharp, with a knife-like edge. PCGS has not cataloged any gold counterfeits produced in this way and it is most commonly seen in small types like cents and dimes. 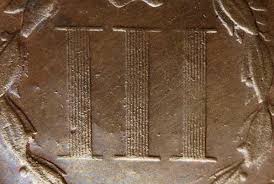 Electrotypes. Surprisingly, this method of production is most commonly used to make coins for legitimate purposes. Often a museum or other entity will produce electrotype replicas for security reasons or to display the obverse and 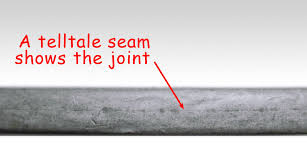 reverse simultaneously. These coins are made by pressing a genuine coin into a soft surface and the electroplating the negative impression. This leaves behind a positive shell that can result in a very convincing forgery. It is ideal for display purposes but, like the cast counterfeiting procedure discussed previously, only one side of the coin can be produced and this creates the problem of joining the sides together. Most electrotypes have a fairly noticeable seam along the edge. And just like cast coins, electrotypes generally won’t pass the “ring” test used to tell if a coin is solidly struck. To make this determination, the coin is balanced on either side, sometimes on a finger. When struck with a pencil, a genuine coin will emit a high pitched ring. Casts and electrotypes will thud or clunk because of the lack of solidity that results from production. However, clever producers sometimes place a glass sliver in between the two halves to produce the desired sound when tapped. The glass will frequently result in electrotypes that are under or overweight compared to their genuine counterparts.

Transfer Die Counterfeits. Transfer dies are the most common tool used when the coin’s sole purpose of production is to defraud. In this process, the counterfeiter actually creates a working die by pressing a genuine coin into die steel. The product that results is called an impact die and also results in the destruction of the original coin. Although these coins can be difficult to detect, they are always identifiable because any imperfections present on the surface of the original are now present in the die. Therefore, all subsequent coins produced from these dies contain these defects. These flaws often show up as bag marks. Although legitimate coins frequently exhibit bag marks, the odds of two or more coins presenting the exact same flaws in the same place are astronomical. Sometimes these coins are even identifiable from the counterfeiter’s efforts to remove these flaws. Often, a producer will try to remove flaws from the dies but in doing so creates what are referred to as tooling marks. These appear on a coin as stubby, short, raised lines. So, somewhat ironically, in an effort to remove a repeating, but unobtrusive mark, the counterfeiter has created an even more identifiable fake. In an effort to save time and materials, counterfeiters will use the same undated side of the coin in combination with many dated sides. The United States Mint has rarely used the same undated sides from one year to the next. The Mint’s dies are usually in excellent condition and won’t exhibit the repeating defects shown in counterfeits. 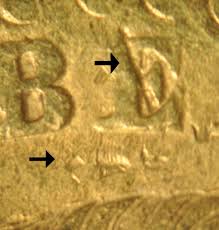 Tooling marks resulting from an attempt to fix flaws in and around lettering.

Alterations. As the name would suggest, these forgeries are produced by changing a genuine coin so that it becomes more valuable. One of the most common alterations is changing a mint mark. Sometimes this is achieved by epoxying the desired mint mark; other forgers solder the mint mark to the coin. For example, by adding an “S” to a real (albeit common) 1909 VDB Lincoln cent, the counterfeiter has made the coin look like the highly prized 1909-S VDB. In other alterations, the date has been changed. There are several examples of the first “4” of a 1944- D Lincoln cent being altered to appear as a “1”, making it look, at first glance, to be a key-date 1914-D. 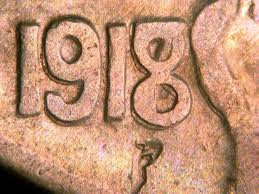 Contemporaries. This is a special category reserved for coins that were forged in order to spend them. They were produced at the same time as the Mint was making legitimate counterparts. These were frequently produced by using had-cut dies. These coins are generally very crude and obvious to an expert, but not so crude that they wouldn’t dupe a merchant from the period they were produced. The design elements, digits, and letters never quite match the real thing. Not surprisingly, examples of these coins pop up in history during widespread financial hardship. These include three cent silvers and Capped Bust half dollars that were produced and spent during the Civil War, as well as many 1933 half dollars that were utilized during the Great Depression.

If the Rare Coin you purchased does not meet or exceed your expectation you may returned it anytime within a two week period from the date of shipping. So long as it has not been removed from the original, undamaged holder. Bullion related items cannot be returned for a refund but will be purchased based on the current market prices and conditions.