“Honesty is for the most part less profitable than dishonesty.” – Plato

Almost immediately after the idea that currency could be exchanged for goods and services become part of civilization, people began to produce counterfeit coins. Originally these forgeries were produced with the intention of spending them. More recently, scam artists have branched out into the world of collectible currency. Realizing that deceiving collectors was more lucrative than passing fakes off to merchants, counterfeiters’ knowledge and technology has grown side by side with those producing the genuine article and those that detect forgeries. Eventually the numismatic community was confronted with a confusing array of counterfeits that were produced in several different ways. In response to the growing concern over counterfeits by its members, the American Numismatic Association started a specific branch to deal with the problem in 1972. The newly formed agency was named American Numismatic Association Certification Service (ANACS). Coins submitted to ANACS were deemed to be genuine or not and returned to their owners. Besides certification, ANACS disclosed its findings and published diagnostic features that would help the public identify counterfeits. By 1979, ANACS’s role had grown to encompass grading coins. A few years later, they were joined by the  Professional Coin Grading Service (PCGS). Although the main focus of these groups is placing a grade on coins, part of that process is determining authenticity with unquestionable accuracy. While convenient, getting a coin certified will cost at least $30. Coins valued below this dollar amount are often not sent for certification and could be counterfeit. This article will focus on the basics of determining authenticity and is the first in a series discussing counterfeits.

There are quite literally volumes of text that have been written about counterfeits. The methods and technology of producing fakes are as varied as the coins being forged. Therefore it is easier to train yourself to look for indicators of authenticity rather than knowing the myriad identifiers of a fraudulent article. Knowledge of how coins are made, the shapes of mint marks, the styles of numerals, and the characteristics of dies all play a role in determining the authenticity of a coin. However, this knowledge is only accrued through time and experience. The factors of authenticity just discussed are available in large part due to the way the United States Mint treats its dies and coins. Because of the meticulous nature of the minting process, there are certain aspects of real coins that counterfeiters have a difficult, if not impossible, task of recreating. This gives knowledgeable collectors a distinct advantage: while a counterfeiter may have to make several versions of the same coin, the fact that the U.S. Mint may only use one or two dies to produce a coin means the identifiers from those dies will be present in every coin struck. These characteristics are discussed below.

Die Elements. The dies used by the U.S. Mint are routinely cleaned and maintained. During this process the dies develop bulges, cracks, clash marks, and other minor imperfections. Being able to recognize these polish marks makes it possible to authenticate a coin. Certification services habitually examine the well-protected areas of a coin to find the crisp, well-defined die polish marks. Just as cleaning and polishing leaves points of recognition, foreign materials sometimes find their way into dies and leave marks as well. Additionally, the multiple transfers that occur during the minting process causes the luster of devices and fields to contrast. The luster alone on some counterfeits is sufficient for experienced collectors to notice them. Although crucial, die features are the ones most routinely lost in counterfeiting.

Quality of Devices. On United States coins, the letters, numerals, and visual features should erupt squarely in a defined, sharp manner. The tops of the devices should also be as precise. 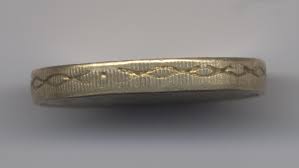 A noticeable imperfection on the edge.

Edge. Although sometimes overlooked, knowledgeable collectors consider a coin’s edge to be a third surface that is just as vital as the obverse and reverse. It can help identify alterations to a genuine coin as well as designate an out-right fraud. One of the most detectable edge features is the seam that results from cast counterfeiting when the obverse and reverse are joined. 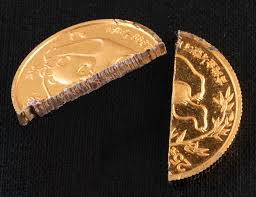 Specific Gravity, Weight, and Materials. Because counterfeiting has advanced to the point of being able to match authentic coins in physically quantifiable parameters, this is the least likely mode of detection to be successful. But if a collector is suspicious that a coin might be fake, it’s a good idea to check. For example, if that $20 gold piece you’re considering purchasing sticks to a magnet, put it back.

An obviously corrupted mint mark on a Half Dollar

Understanding of Mint Marks and Date Punches. As with most subjects, the best defense against being fooled by a counterfeit coin is knowledge. Knowing and recognizing the punches used in the production of genuine U.S. coins. This is particularly important knowledge for coins that are frequently altered. When a collector knows the style of the date or mint mark punch, any coin that deviates from that style is immediately suspected of being a forgery.

Although the basic features discussed above are important, they merely scratch the surface of all that can be studied regarding counterfeit coins. And while these points are germane to the conversation, the biggest  factors as to whether or not an individual collector will be duped by a fake piece are knowledge and experience. There is a lot of information that can be obtained by collectors willing to share it. Major coin events often have counterfeit seminars where interested collectors are instructed in a classroom setting over several days. Collectors that can spot a fake seemingly instantly have examined a vast amount of coins. And while knowledge takes the effort to obtain it, experience only comes with spending time observing the coins.

If the Rare Coin you purchased does not meet or exceed your expectation you may returned it anytime within a two week period from the date of shipping. So long as it has not been removed from the original, undamaged holder. Bullion related items cannot be returned for a refund but will be purchased based on the current market prices and conditions.